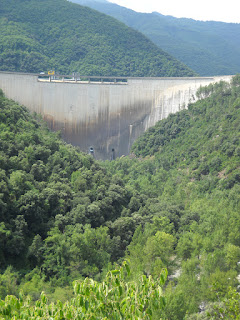 This morning it was completely overcast and just a bit chilly. Philippe has been eyeing some mountain lakes that are to the Northwest of us by about 30Kmeters.  The plan was to go up to the dam that formed the lakes then ride along the lakes for a while, before turning back and returning home. I wish that I had my map handy, but we departed on the 540 that has become a favorite route with many of the the riders. The GI-540 climbs a bit as you leave the villa and after several kilometers drops via many winding curves to main east / west thoroughfare (N-141). Turning left you end up in Angles then we head north through the town of La Cellera de Ter before heading west up a winding road that seems to be owned by the either the power company or the dam operators. I haven't checked with Jim yet, but I'm guessing that we must have climbed about 1500 feet in 10 Km or so.
We got the the top of the dam and took in the the view. But looking at the lake from the dam, we were on the wrong side to travel the road that we wanted to and the traffic was prevented from crossing the dam to the other side. After some aborted attempts to climb a bit higher, we decided to head back Angles for lunch. It was about 2PM and we were famished. An hour later we were in a bar in Angles snacking on ham and cheese sandwiches and drink beers. Then it was on to the villa, arriving about an hour later.
Tonight, I'm on the team that is preparing diner for the group. We arrived back with wonderful smells escaping from the kitchen. I'm not sure what the entire menu will be, but I'm in charge of the BBQ. Albert has gotten some thinly sliced pork and has them soaking in spices.  All I have to do is to fire up the grill and to cook the critters. Dinner will be about 7:30. As a matter of fact, it's now time for me to tend to the grill.
Posted by Brian Cox at 2:03 AM