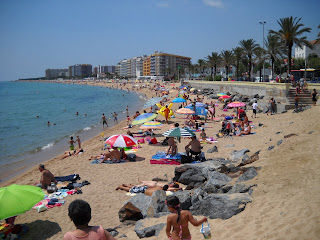 Today was the plan A day, ride to the Mediterranean Sea. Albert using his Garmin GPS software had mapped a route south to Blanes on the Mediterranean Sea. We had a light bite to eat on the beach at a seaside restaurant overlooking the Mediterranean sea and a bathing beach. Then it was onward along the sea heading northeast passing through the seaside resorts fighting the local traffic. According to the map, we traveled a bit more than 15Km before stopping in Tossa de Marr for some ice cream and water.


We then turned inland traveling on the GI-681, a beautiful mountain pass that climbed upward from the sea. I guess I didn't have enough food at lunch, because I had to reach into my back pocket for an energy bar. When I'm biking at home in California, I rarely carry energy bars, but I trips like this where I don't know were the next stop is going to be, you really need to carry some extra food. 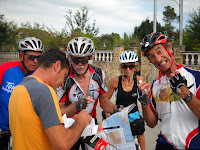 We coasted into the town of Llagostera after reaching the top of the pass, then the maps came out as everyone debated the best way to get back to the villa. After several turns on tiny back streets and consolidations with locals, we were on our way back home. I think that the distance for the day was a bit over 120Km and 3400 feet (1036 meters) of climbing.
Posted by Brian Cox at 2:02 AM